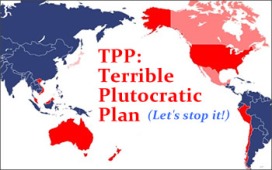 Delivering yet another blow to this country’s Democratic process, President Obama is expected to buck Congressional authority in order to push through a trade agreement with devastating consequences for millions of people. Consistent with its proclivity for secrecy, the Obama administration has revealed little information about its negotiations of a massive “free trade agreement” with eleven nations. These countries, which have been in negotiations since 2008, encompass nearly 40 percent of the global economy.

The clandestine agreement, known as the Trans-Pacific Partnership (TPP), would sidestep domestic laws and protections for national economies in favor of prioritizing the interests of multinational corporations. Slated to become the largest free trade agreement in the world, the TPP is on track to curtail Internet freedom, rollback corporate regulations, end Buy American and Local preferences for government contracts, undermine food safety, diminish fair labor standards, and threaten the health of millions of people. A complete lack of transparency in these secret negotiations is not only in stark contrast with American democratic values but also represents a clear departure from democratic government.

The detrimental effects of the TPP are far reaching. Among the most egregious is the assault on access to affordable medicines. Generic competition is vital in reducing the price of drugs: a robust generic market for the first antiretroviral therapy (ART) to treat HIV/AIDS reduced the price of the medicine by 99 percent over ten years. This price reduction was instrumental in scaling up HIV/AIDS treatment to over eight million individuals in the developing world. Currently, 80 percent of ARTs used in developing countries are generic medicines produced in India. The TPP strengthens and expands pharmaceutical monopoly protections.

Leaked documents, the only source from which to garner information about the proposed content of the TPP, indicate that the agreement seeks to impose aggressive intellectual property standards. Much more restrictive than existing policies, these new IP measures would make approval of generic drugs more difficult to secure. They would lower patentability standards, limit the ability to challenge unjustified patents, extend patent terms, and set ownership controls over safety data regarding drug usage. The agreement would create extensive new drug monopolies and limit the economies of scale that generics industries rely on to ensure drug affordability. In courting corporate interests, these regulations will curtail public measures that ensure access to safe and affordable medicines, denying people across the world access to life-saving drugs. 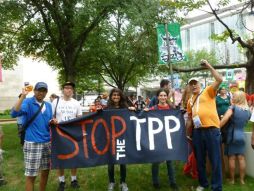 ACT UP Boston members in Washington DC to fight the TPP.

In addition to prioritizing corporate profit over public health, the agreement represents a larger attempt to promote the dominance of U.S. interests to the detriment of other nations. The secretive nature of negotiations, which sidesteps input from multilateral groups such as the World Trade Organization or the World Intellectual Property Organization, will likely result in an unbalanced intellectual property system. By raising intellectual property norms in developing countries and promoting patent law in this way, the US is perpetuating the linkage of the costs of drug development to high drug prices. This is not a model that addresses the research and innovation needs of developing countries. Essentially, drug development will only occur if the resulting discovery will be a massive money-maker, neglecting public need in a way that disproportionately impacts developing countries.

Among the many detrimental provisions of the TPP, another one certainly stands out for its sweeping and permeating effects — deregulation of the financial sector, including banking, securities, pension funds, and asset management. Today’s pervasive sentiment around the world that favors robust regulations of financial institutions to avoid an encore of the 2008 global financial crisis goes completely ignored by TPP negotiators. In a demonstration of undemocratic secrecy the Obama Administration has partnered with eleven governments to deregulate the world financial sector, and, in doing so, thwart efforts to reduce risks financial services pose to taxpayers.

The Obama Administration wants to sign onto the TPP and is pointed to do so without any public evaluation or discussion of the agreement’s measures. The “fast track” process Obama is pushing for prohibits Congressional amendments to and filibusters of the bill. It diminishes the ability of Congress to express its authority to check executive power, resulting in the passage of potentially detrimental legislation without complete review. Senators and Representatives would be required to vote on the measure without any chance to propose amendments or request extended evaluation. The action by the Administration sets the precedence for circumventing domestic law in securing global agreements.

Elevating corporate interests over open government, democratic principles, and the public good, the TPP is critically flawed in both process and content. We call on President Obama to hold true to his campaign promise of transparency and accountability. We call on our elected President to extend the courtesy of our domestic process to other elected government members, our Senators and Representatives. We call on a world leader to fight for access to health care for all, not just a privileged few.

Isabel Ostrer, Lily Ostrer and Maria Smith are members of ACT UP and the Student Global AIDS Campaign.